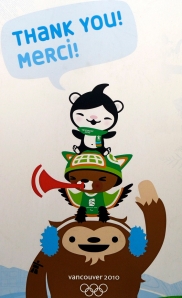 This blog began on the first day of 2010, with the Vancouver Winter Olympics just six weeks away…

But now it’s been ten long months since the Olympics ended, and with hardly any new Quatchi items to report, it’s fitting that we end this blog today, on the last day of 2010. Of course we’d love it to continue, but with the scant Quatchi action of late (and even less expected in the future), it’s best we wrap it up now, instead of letting it limp along indefinitely.

However, everything we’ve posted here will remain at this URL as long as Quatchi-ly possible, and it should all remain tagged and searchable (though some of the embedded videos have been removed, and more will probably follow). Also, any posts we’ve updated since their original publication now have an update tag, as will any posts we might update in the future (say, if we come across more dogs named Quatchi). Meanwhile, both the Quatch Watch and Quatchifan2010 blogs still routinely post neat stuff worth checking out. And, in the unlikely event of any major breaking Quatchi news, it’ll be covered on Steve’s blog, tagged with the Quatchi label.

Some inside poop: During the past year, lotsa folks have written us wondering where we find so much about Quatchi — it’s actually pretty easy. Of course there’s Google, but also worth a search is Bing. (F’rinstance, in recent news, the Museum of Vancouver inherited a whole mess of Olympics artifacts, so perhaps one day some historic Quatchi memorabilia will be displayed there.) For photos there’s flickr and Picasa; for video there’s YouTube and Vimeo; for all that great fan art, there’s deviantART. To buy Quatchi swag, see both eBay as well as the Canadian eBay.

Now, as we said at Olympics’ end, beaucoup thanks goes out to everybody who’s read our blog, commented on it, linked to it, and sent us helpful Quatchi tips. Above all, mucho megatons of thanks to Meomi, who created the eternally lovable Quatchi and his mascot friends in the first place… Incidentally, Meomi is enjoying an even greater success with their groovy Octonauts, so congrats to Vicki and Michael!

So that’s about the size of it. See you in the funny papers!

Above, Derek K. Miller’s It’s a Quatchi Christmas; below, 11 more days until Christmas by still-a-fan…

And from Sophia at Quatchifan2010…

Go here for an interactive Flash thing by Dado94, where you can play “Jingle Bells” by clicking on the mascots in the proper order… 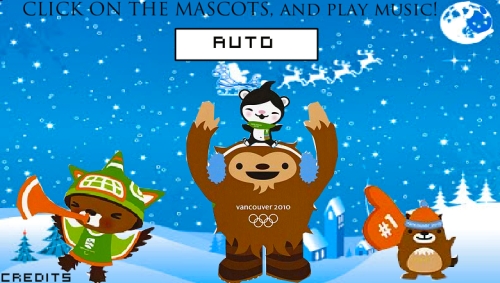 Let’s go out on a lighter note, with this fun pin…

Eliza drew the above Quatchi on wax paper around a sandwich she made for my lunch (!); below, Quatchi chases Miga for oversize novelty tickets… 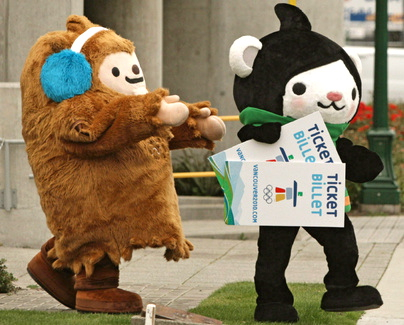 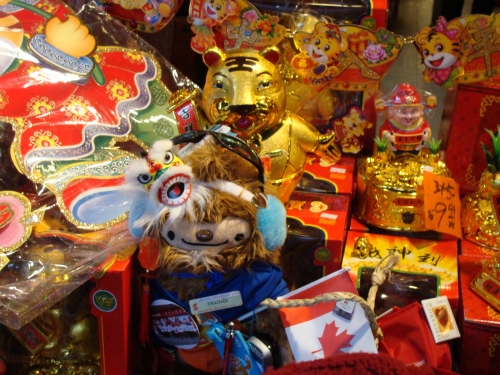 Quatchi helps with the laundry at women’s hockey by tarbot (apparently spotted on a giant video screen, otherwise, I don’t know the context)… 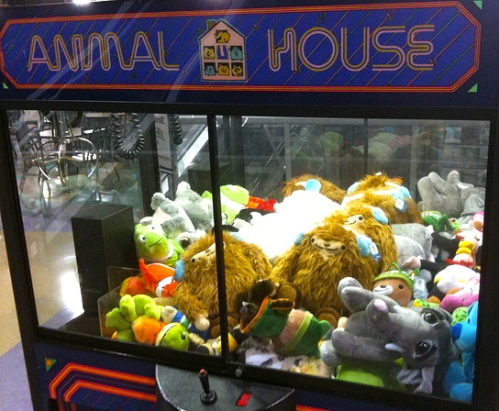 Quatchi and Miga travel in style…

I love this umbrella photo by cheukiecfu…

Finally, (on second thought, the image was in relatively poor taste for this blog, so I removed the link)… And click this for our first post of Random Quatchi Images!

Still, here’s some fun Quatchi puck action that hasn’t fit into earlier posts, like when he celebrated Canada’s gold-medal victory…

In his Canucks sweater, found here…

This is the first image in another killer flickr set by The Blackbird, Quatchi’s Dream Comes True…

Heather Amska sent in this photo way back when, sparking the idea for this post…

Finally, play Quatchi’s Shootout Shutout while you can, ’cause rumors abound that the whole Vancouver2010.com site will disappear come 2011…

I love the game’s never-say-die attitude: even if you don’t make a single save, it still says, “Looks like you’re getting the hang of it.” 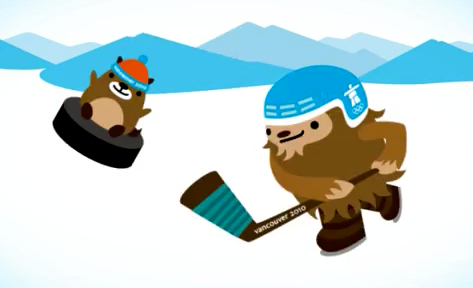 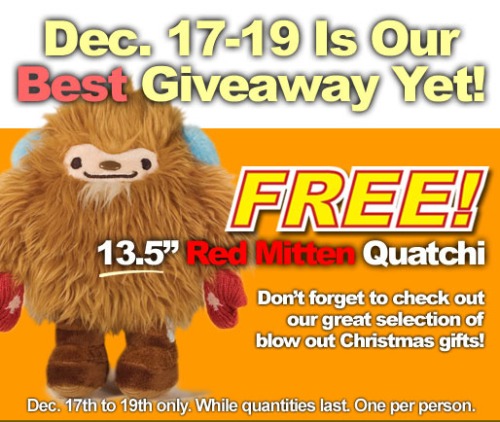 Will they ever run out?

I can’t track down to where I found this — my apologies to the artist.

The artist is Samantha Herle. Turns out we previously posted her sweet drawing in Quatchi Fan Art #11, but hey, it was worth a second look! 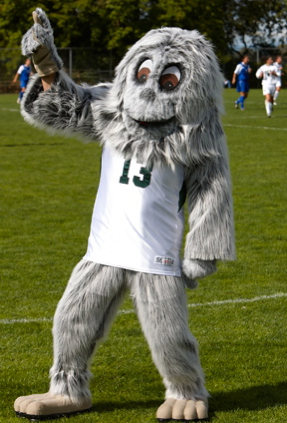 In case you were wondering, there have been other Sasquatch sports mascots besides Quatchi. Above, we see Sasq ‘ets, who cheers on the University of the Fraser Valley Cascades… Below is the creepy Strike the Sasquatch, representing the Northwest Arkansas Naturals baseball team. 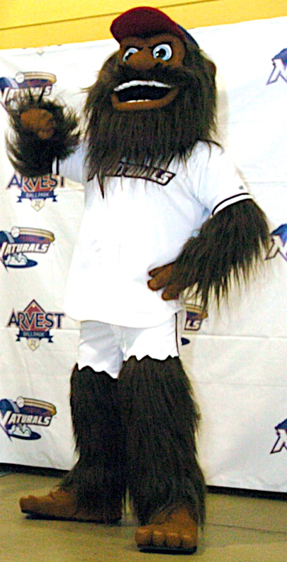 Finally, the even creepier Squatch, who was made extinct when the Sonics basketball team left Seattle in 2008.

This is Shivers, mascot of the Kootenay Ice hockey team:

Not sure if the short-lived Montreal Sasquatch basketball team had an actual mascot, but here’s their logo: 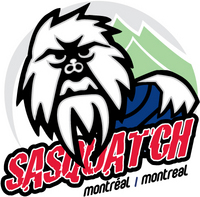 This is the logo for the seemingly defunct Saquatch hockey team: 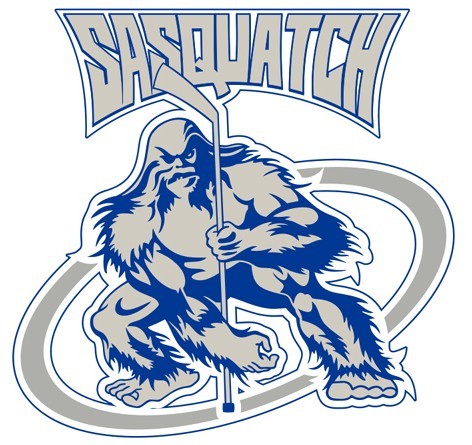 And here’s another look at Shivers: 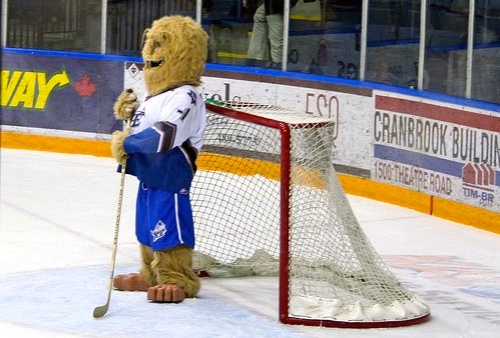 We somehow missed this gem from July 2009, from the Blackbird’s most excellent 2010 Olympic Mascot Mayhem flickr set. That’s Vancouver 2010 Integrated Security Unit Chief Operating Officer Bud Mercer in the Vancouver City Hall Council Chambers, displaying an image of Quatchi’s masked gang wielding Molotov cocktails. He got the picture off the Internet, though I can’t seem to find it myself (I guess that’s why he’s the security chief and I’m not). Apparently he thought the mascots would be some sort of terror threat — the woman seated to his right looks mighty worried.

Another weekend, another mascot blowout.

Big thanks to commenter Lauren C. for reminding us that today is Quatchi’s third birthday!

More accurately, it’s the third anniversary of the unveiling of the Olympic mascots, but close enough!

Yeah, I know the picture above says “HappY 2ND BiRTHDaY”… Anybody wanna Photoshop it up to date?